The Blue Ribbon Commission on the Prevention of Youth Violence (BRC) was formed in 2008 as an initiative under the United Way of the Cape Fear Area as a response to the prevalent violence among youth in the North side of downtown Wilmington at the time. The BRC played a significant role in reopening D.C. Virgo Preparatory Academy in 2012, a public middle school in the Y.E.Z. that was previously shutdown due to low enrollment and low performance. After reopening Virgo, the BRC moved our headquarters within the school and opened a Parent Room. For the past 4 years the BRC has served a vital role at D.C. Virgo acting as a liaison between the school and the community working to meet the significant needs of the student population.achieved r

eal success, helping children and families in and

In 2013 the BRC began operating as its own independent  501(c) (3) non-profit with the mission of “Building a community where youth are safe, healthy, educated, and successful…Now!” and began expanding efforts to serve a much larger number of youth and families within the YEZ in elementary, middle, and high school.

In the summer of 2015, the BRC partnered with the City of Wilmington, to expand our operations to the Hemenway Center, a centralized community center within the YEZ that has provided an opportunity to increase and enhance the services offered to the community. In addition to offering a meeting space for the VOYAGE Youth Leadership Council and Community Council, the Hemenway Center is also used as a resource center for community members to come and find information on available services and programs offered by our community partners. The primary two services offered through the BRC are Community Outreach Advocates and the Youth Summer Employment Program. Read more about these services under the “VOYAGE” and “Community Outreach Advocacy” tabs located in the main menu bar at the top of this page.

The area that the BRC committed to serve is the Youth Enrichment Zone (YEZ), which is a mapped out area of the North side of downtown Wilmington with approximately 400 families and was identified through a 2008 crime study as an under-resourced area with the highest concentrated area of youth violence. The YEZ is an approximately 140 square block area and based on the latest census data, the average income for African American households within the Y.E.Z. is $14,500. In addition to serving families in the Y.E.Z., the BRC serves students living in the low-income neighborhoods in and around Creekwood within our programs. Students served by the BRC primarily attend Snipes and Freeman Elementary Schools, D.C. Virgo Preparatory Academy, and New Hanover High School. Through our work within the YEZ, we are focused on creating sustainable change through transforming a community one block, one neighborhood, one area at a time in order to develop an effective model that breaks the cycle of poverty and builds a pathway towards success for our youth. 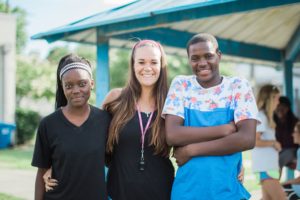 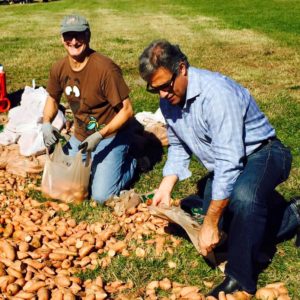 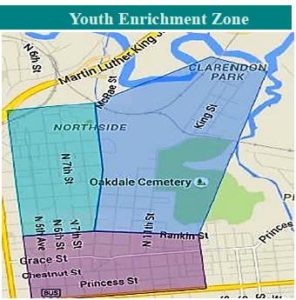